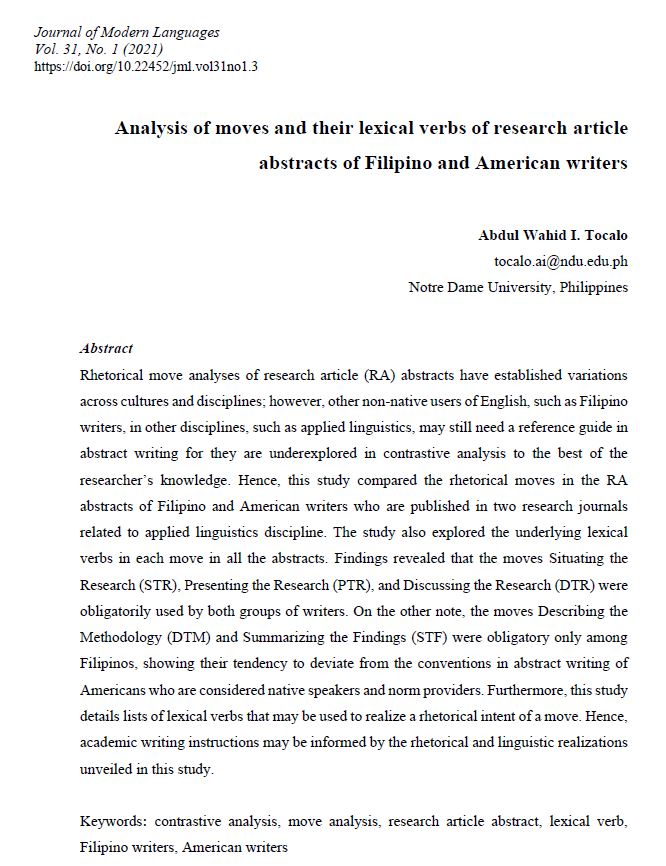 Rhetorical move analyses of research article (RA) abstracts have established variations across disciplines and cultures. However, there is still a need for more explorations on Applied Linguistics discipline. Comparing native and other group of non-native speakers of English, such as Filipino users of the language, has also been a neglect in research as far as the researcher’s knowledge is concerned. Hence, this study investigated the rhetorical moves in the RA abstracts of American and Filipino writers who are published in two journals related to Applied Linguistics field. The study also explored the lexical verbs underlying each move in all the abstracts. Each abstract was then segmented into moves. Findings revealed that the moves Situating the Research (STR), Presenting the Research (PTR), and Discussing the Research (DTR) were obligatorily used by both groups of writers, while the moves Describing the Methodology (DTM) and Summarizing the Findings (STF) were obligatory only among Filipinos and optional among Americans. Filipino writers appear to develop their own conventions deviating from Americans who are considered native speakers and norm providers. The results also amplify the existence of cultural differences even in abstract writing. Further, the study details lists of lexical verbs that may be used to realize a rhetorical intent of each move. Hence, academic writing instructions may be informed by the rhetorical and linguistic realizations unveiled in this study. Directions for future research are likewise provided.