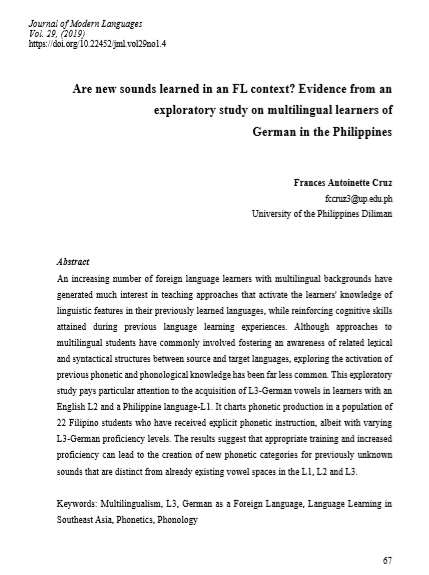 An increasing number of foreign language learners with multilingual backgrounds have generated much interest in teaching approaches that activate the learners' knowledge of linguistic features in their previously learned languages, while reinforcing cognitive skills attained during previous language learning experiences. Although approaches to multilingual students have commonly involved fostering an awareness of related lexical and syntactical structures between source and target languages, exploring the activation of previous phonetic and phonological knowledge has been far less common. This exploratory study pays particular attention to the acquisition of L3-German vowels in learners with an English L2 and a Philippine language-L1. It charts phonetic production in a population of 22 Filipino students who have received explicit phonetic instruction, albeit with varying L3-German proficiency levels. The results suggest that appropriate training and increased proficiency can lead to the creation of new phonetic categories for previously unknown sounds that are distinct from already existing vowel spaces in the L1, L2 and L3.