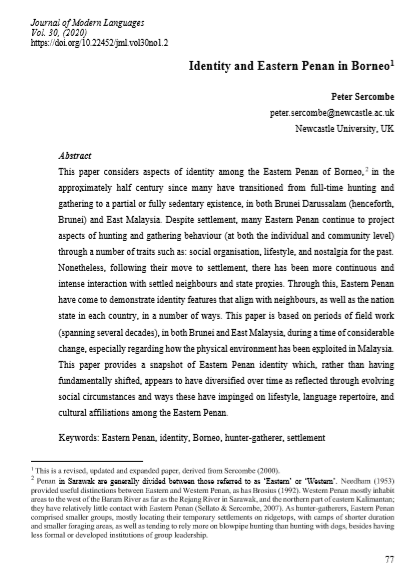 This paper considers aspects of identity among the Eastern Penan of Borneo,[1] in the approximately half century since many have transitioned from full-time hunting and gathering to a partial or fully sedentary existence, in both Brunei Darussalam (henceforth, Brunei) and East Malaysia. Despite settlement, many Eastern Penan continue to project aspects of hunting and gathering behaviour (at both the individual and community level) through a number of traits such as: social organisation, lifestyle, and nostalgia for the past. Nonetheless, following their move to settlement, there has been more continuous and intense interaction with settled neighbours and state proxies. Through this, Eastern Penan have come to demonstrate identity features that align with neighbours, as well as the nation state in each country, in a number of ways. This paper is based on periods of field work (spanning several decades), in both Brunei and East Malaysia, during a time of considerable change, especially regarding how the physical environment has been exploited in Malaysia. This paper provides a snapshot of Eastern Penan identity which, rather than having fundamentally shifted, appears to have diversified over time as reflected through evolving social circumstances and ways these have impinged on lifestyle, language repertoire, and cultural affiliations among the Eastern Penan.