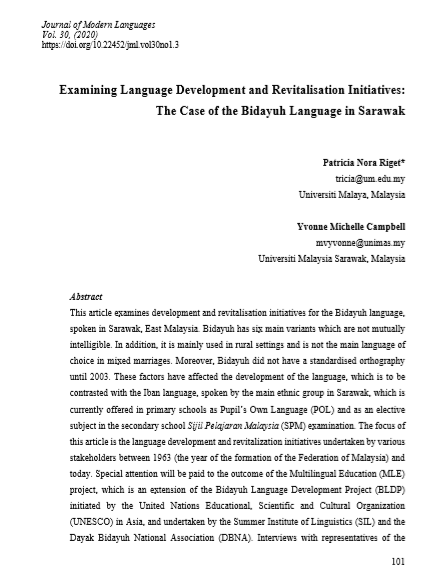 This article examines development and revitalisation initiatives for the Bidayuh language, spoken in Sarawak, East Malaysia. Bidayuh has six main variants which are not mutually intelligible. In addition, it is mainly used in rural settings and is not the main language of choice in mixed marriages. Moreover, Bidayuh did not have a standardised orthography until 2003. These factors have affected the development of the language, which is to be contrasted with the Iban language, spoken by the main ethnic group in Sarawak, which is currently offered in primary schools as Pupil’s Own Language (POL) and as an elective subject in the secondary school Sijil Pelajaran Malaysia (SPM) examination. The focus of this article is the language development and revitalization initiatives undertaken by various stakeholders between 1963 (the year of the formation of the Federation of Malaysia) and today. Special attention will be paid to the outcome of the Multilingual Education (MLE) project, which is an extension of the Bidayuh Language Development Project (BLDP) initiated by the United Nations Educational, Scientific and Cultural Organization (UNESCO) in Asia, and undertaken by the Summer Institute of Linguistics (SIL) and the Dayak Bidayuh National Association (DBNA). Interviews with representatives of the community were conducted to discover their perceptions towards these initiatives, and to identify factors that might contribute to their success and/or failure. The article ends with some suggestions about how to improve the success of language revitalisation initiatives for Bidayuh.