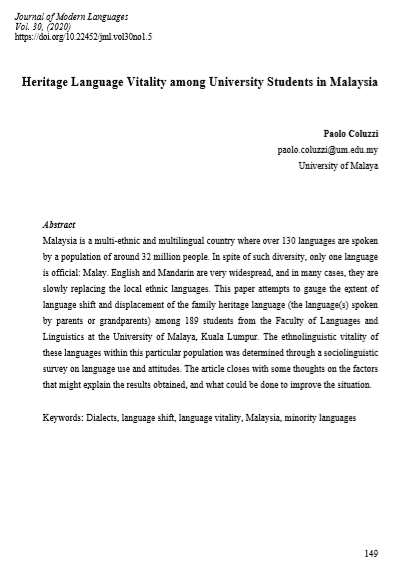 Malaysia is a multi-ethnic and multilingual country where over 130 languages are spoken by a population of around 32 million people. In spite of such diversity, only one language is official: Malay. English and Mandarin are very widespread, and in many cases, they are slowly replacing the local ethnic languages. This paper attempts to gauge the extent of language shift and displacement of the family heritage language (the language(s) spoken by parents or grandparents) among 189 students from the Faculty of Languages and Linguistics at the University of Malaya, Kuala Lumpur. The ethnolinguistic vitality of these languages within this particular population was determined through a sociolinguistic survey on language use and attitudes. The article closes with some thoughts on the factors that might explain the results obtained, and what could be done to improve the situation.