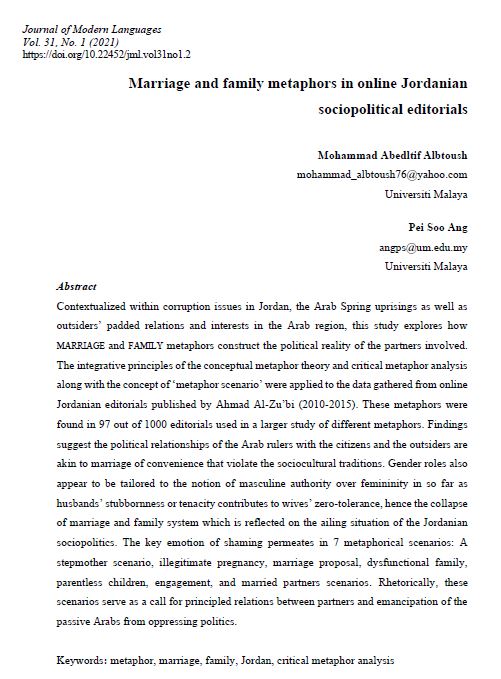 Contextualized within corruption issues in Jordan, the Arab Spring uprisings as well as outsiders’ padded relations and interests in the Arab region, this study explores how marriage and family metaphors construct the political reality of the partners involved. The integrative principles of the conceptual metaphor theory and critical metaphor analysis along with the concept of ‘metaphor scenario’ were applied to the data gathered from online Jordanian editorials published by Ahmad Al-Zu’bi (2010-2015). These metaphors were found in 97 out of 1000 editorials used in a larger study of different metaphors. Findings suggest the political relationships of the Arab rulers with the citizens and the outsiders are akin to marriage of convenience that violate the sociocultural traditions. Gender roles also appear to be tailored to the notion of masculine authority over femininity in so far as husbands’ stubbornness or tenacity contributes to wives’ zero-tolerance, hence the collapse of marriage and family system which is reflected on the ailing situation of the Jordanian sociopolitics. The key emotion of shaming permeates in 7 metaphorical scenarios: A stepmother scenario, illegitimate pregnancy, marriage proposal, dysfunctional family, parentless children, engagement, and married partners scenarios. Rhetorically, these scenarios serve as a call for principled relations between partners and emancipation of the passive Arabs from oppressing politics.

Mohammad Abedltif ALBTOUSH is a PhD candidate at the Faculty of Languages & Linguistics, Universiti Malaya, Kuala Lumpur. His areas of research include conceptual metaphor theory, cognitive semantics, and critical metaphor studies. His research centers on how the cultural-specific emotions of shame and pride are conceptualized and analyzed through universal and culturally specific metaphors in the Jordanian satirical sociopolitical discourse.